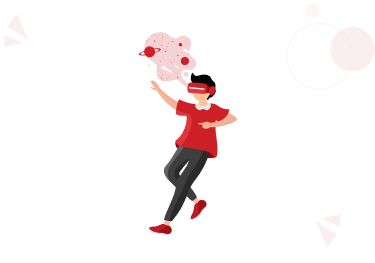 Imagine giving a Virtual Reality (VR) headset to somebody and leaving it to their assumption and imagination what they are going to see in there. They will be teleported to a new world. This can be a real shocker. Hence experiencing VR content begins even before anybody starts using it.

Things to keep in mind while using VR headset

You would say there is a setup manual. But that’s for the developer and its highly possible that end user will see it ever.

Of course, we stand a chance to lose out the first excitement but then there are its downsides too. Based on our experience with trying out VR headsets with the user I believe following points should be considered for a good user experience.

Brief about the VR Experience

Well unlike an instruction booklet showing a small teaser video of what’s going to happen inside VR environment and how the user behaves in physical.

Brief about the VR Headset

VR headset, controllers and cables running around are an integral part of VR experience. Having knowledge about how they fit on our body and how are they going to look and feel in VR world is something that the user needs to be made aware of. In the excitement of experiencing the new world they might want to jump in directly. But they are not early adopters. They are the actual users and this urgency can hamper the overall experience when they fiddle around with different controls and step on cables or the worst stumble because the cable got tangled in their legs.

A quick verbal or visual guide explaining different buttons and triggers on controllers, cables and their connections will help users feel comfortable operating them in virtual environment. It will be of great help if they get to use controller and its buttons/triggers and see it on some monitor before getting into VR. They will not have to fiddle around the controller finding that right button/trigger when you call it out.

Physical environment — Make the user walk around the physical space they are going to be using without looking at it. This will mentally prepare them for the actual physical are. It is highly likely that they will forget about the space around once they land in a different world. But speaking the number of steps aloud will keep it in their temporary memory and reduce the chances of dashing things around.

Make them count the steps from center of the room to the walls and speak aloud.

There are instances when the user wants to leave the experience immediately. They should be trained upfront how to do an emergency exit without harming them or damaging the hardware. They would try to immediately pull out the headset and due to tight elastic strap it can harm their eyes/ears/nose. If the Virtual environment makes them jump or there is fall like situation they may try to balance physically and while doing so damage the valuable items around. So a proper heads up on how to easily take off the headset and walk to safe spot is important.

In the end of VR Experience

What next when the experience is over, application is closed and user has taken off the VR headset? User has been in a different world with altogether different orientations. There are certain things that user should be asked to do before they begin their normal course in real world. It’s like post work out cool down. Well with the new VR headset post use marks on the face are going to go as they are becoming more ergonomic and easy to put on. There are face masks also available which soaks perspiration and makes the headset hygienic.

Well, there is much more to add as we go ahead experiencing VR through the eyes of our users!

To learn UI/UX Design for Virtual Reality using Oculus, Get mentorship from industry experts from Samsung, Microsoft, Cisco, IDF and start your career as a VR UX Designer, check out this course offered by Designerrs Lab on “Designing for Virtual Reality”.

Setting context before experiencing VR was originally published in DSchool on Medium, where people are continuing the conversation by highlighting and responding to this story.